Start by driving to Abernethy (near Cessnock) and park at the end of Ferguson street just past the (impressive) Abernethy Hotel which must have been strategically built just there to cater for thirsty miners on their way home from work!

There are no signs for a walk or the abandoned site but just follow the trail that goes straight ahead. Go past the first turn-off to your left but take the second one. This is a trail that may be suitable for a 4 wheel drive but not after wet weather, and it looks to be frequented by trail bikes. Walking downwards you’ll soon spot the tall chimney, but first you will reach the old winding house for the Aberdare South Colliery which was in operation between 1913 and 1927. Half the roof is missing and it has been neglected, but the brickwork is still impressive and you get an impression of previous grandeur. Go to the right and follow a trail around and once it loops back you will get to the site of the old shaft which has been appropriately covered and cemented. Continue on to the chimney which looks to have a few cracks in it and may not be standing for many more years.

Then walk down towards the dam and walk around it with the dam on your left. It is quite idyllic with ducks swimming and lots of birds in the bush. On the other side you need to turn right and then walk back up to the main trail which is the first intersection you walked past on the way in. Turn right again and you’ll be back at the car (this walk is about 2km long)

Next, drive down to Kitchener which is sign posted from Ferguson street (left turn) – it is less than 4 km and will take you about 5 minutes. The Poppet head Reserve is fairly obvious with its restored Poppet head (i.e. winding tower above the mine shaft) dominating the park. This belonged to the Aberdare Central Colliery which was in operation between 1914-1961. The poppet head and the surrounding park with facilities were restored by local enthusiasts in the 1990s. With the poppet head at KItchener and the winding house and chimney at Abernethy you get a good feel for how a mine site was set up and operated in the last century. There is an excellent playground and barbecue facilities in the park and extensive coverage of the restoration project is displayed. 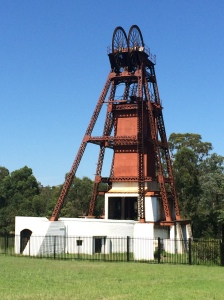 There are two walking trails at the Poppet head Reserve; a short one (1.5km) around the adjoining dam, again teeming with ducks and birdlife, and a longer one (5km) that goes through the bushland.